I was looking forward to knowing you. As my wife said you are one of the closer and more friendly relatives. 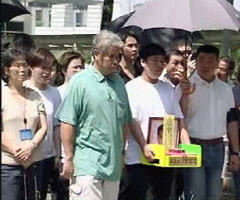 He was given a full military funeral, like his two fellow NSmen who were killed on the spot on the day of the accident.

It was a tragic end for the 19-year-old National Serviceman.

He had been fighting for his life for more than two weeks since being flown back home for treatment.

But with burns over half his body and respiratory injuries, he lost that fight early Monday morning.

His 17-year-old brother headed a group of friends and family members at the Mandai Crematorium in the walk from the main gate to the funeral hall.

More than 400 servicemen from the Combat Service Support Command gave a final salute in tribute to their fallen comrade.

In the end, three shots were fired by the Guard of Honour as a mark of respect, with a lone bugler bidding a final farewell.